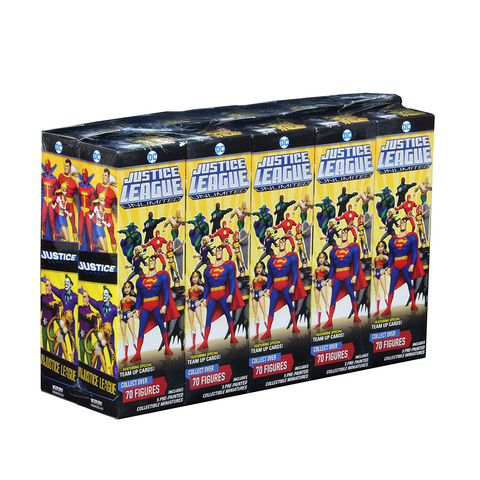 Expand Your Set With Boosters! This 5-figure booster release features many hotly-demanded and fan-favorite sub-themes like the Justice League, the Seven Soldiers of Victory, the Injustice League, the Justice Lords, and the Superfriends! Justice League Unlimited will also feature never-before-seen Team Up cards! These cards will be a rare bonus 6th character card that come inside some boosters, and give you the option during team-building of using a super-charged version of the character if they show up with the right mix of their teammates! Existing and new HeroClix fans will get to power-up their collection with fan-favorites and never-before-Clixed characters, including Batman, Superman, Wonder Woman, Darkseid, Static, Amazo, Blight, Batman Beyond, Captain Atom, Emil Hamilton, Booster Gold, and more! This booster set contains: 17 Commons (plus 1 Prime) 17 Uncommons (plus 1 Prime) 16 Rares (plus 1 Prime) 15 Super Rares (plus 1 Prime) 8 Chases